Alan Kingwell used to work for the Forestry Commission, giving him the opportunity to experience the forest and moorlands in their many different moods throughout the year. Then he had little time to paint, but today he can draw on the images he recalls and the feelings they invoke.

Alan often finds it difficult to part with a finished work. He likes to live with a painting for a while, but that is rarely possible, for as soon as it is completed it goes off to gallery and he will never see it again.

Over the last few years Alan has been holding regular oil painting workshops for small groups, teaching people of all abilities.

In June 2002 Alan´s career nearly came to an abrupt end when, on a walk with his family at The Dewerstone on the River Plym, he fell more than 35 ft into the swollen river breaking several ribs and receiving a severe compound fracture of the right forearm.  The injury was so bad that the surgeons considered amputation, but they managed to piece his arm back together in a 5 hour operation. After a very long spell in physiotherapy Alan was able to paint again.

One of the highlights of his career so far was having a painting shortlisted as one of 200 out of 15,000 entries in the Daily Mail ‘NOT The Turner Prize’ 2004.  Alan exhibits widely throughout the country as well as in Ireland. 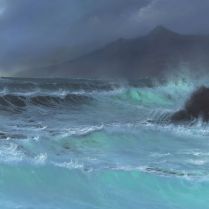 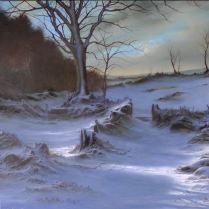