Born in 1973, Eric Armusik grew up in the northeastern coal region of Pennsylvania. Once one of the largest coal mining operations in the county, his hometown was a landscape riddled with the depressions of post-industry.

The community drew strength from faith with churches on each city block. This is where Eric had his first experiences with art, staring at the walls and ceilings at church on Sunday. The traditions and academic realism of Catholic religious paintings and artwork made a permanent impression that continues to influence his work today.

From an early age Eric´s artistic talents became evident. From the age of 10 onwards he continued to win numerous competitions and in 1990 he was awarded for his Contribution to the Arts by Wilkes University. In 1991, Eric attended Pennsylvania State University, where he earned a B. F. A. in painting. In 1995 he received the Margaret Giffen Shoenfelder Memorial Scholarship for the Arts and finished his art history minor abroad for a semester in Todi, Italy.

During his art classes there he drew from original paintings, architecture and sculptures by the old masters such as Michaelangelo, Bernini, Caravaggio, Rubens and Donatello. The rare opportunity to study masterworks by Baroque painters Caravaggio and Artemisia Gentileschi had a profound effect on the quality of his work and focused the inspiration he experienced as a child.

After years of learning the techniques of the old masters Eric honed his skills at the Philadelphia studio of renowned international realism artist and portrait painter Nelson Shanks. Now Eric’s paintings have established him as one of today’s strongest purveyors of traditional figurative painting.

Eric has since won many awards and has been represented in galleries and museums in Europe and the USA. He is married and has three children. 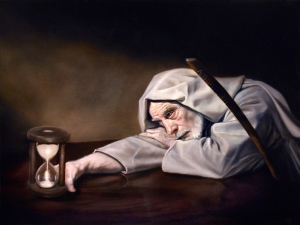