John Cogan earned a Bachelor’s degree from Texas A&M University, then an MA and a Ph.D. in experimental physics from Rice University. He worked in the corporate world for a while, but in 1982 he left his job to pursue painting full time.

John captures the beauty of our planet on canvas, painting the landscapes and wildlife of the American West. He works in acrylic, focusing on color and the effects of light with the Grand Canyon being one of his best loved subjects.

Recently John was commissioned to paint 25 landscapes for the Sultan of Oman working from photos supplied by the Sultanate.

John won three awards in Zion National Park’s “In the Footsteps of Thomas Moran” plein air invitational in November of 2013 after winning awards at this event in 2010, 2011 and 2012 including the Superintendent’s choice in 2011.

John is represented by several renowned galleries and his works can be found in many notable collections around the world. 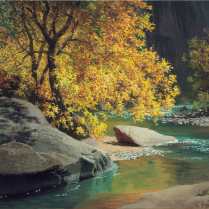