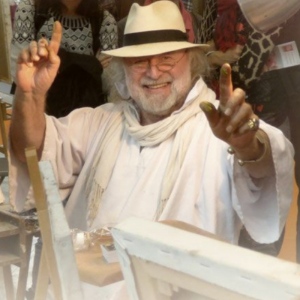 Another one of my programmes presenting realist artists has gone on air in cooperation with a German TV channel. This time it is all in German.

German artist Herdin Radtke produces beautiful oil paintings. Herdin is a life long artist who once worked in the circle of Salvador Dali. His workshops are popular in many countries and he has published books and numerous training DVDs.

Once a month a new member of AERA has his or her work put in front of a wide audience. I add German subtitles to make it accessible to viewers who are less fluent in English. The productions are shown on the German TV channel several times over but they have also been entered into their free public media library.

The channel has a potential of reaching 7 million viewers in Germany. It is also available in other countries such as via Zattoo with 20 M subscribers in Switzerland, Germany, Denmark and Spain where you can register for free. Furthermore it is available via on-demand media in many countries via Apps for Kodi and Amazon Fire TV.

Painting and drawing have been my passion for decades. I have attended numerous exhibitions in England and Germany. Presented with several awards for my paintings I now have one of my works on permanent display at a museum in Greater London with growing sales and commissions.
View all posts by Pat Harrison →
This entry was posted in Uncategorized and tagged AERA, art, German, Lorraine Watry, oil painting, Pavel Sokov, portrait, realist artists, television, tv series, watercolour. Bookmark the permalink.

This site uses Akismet to reduce spam. Learn how your comment data is processed.